Thanks for your positive feedback and your help thus far. I am excited! Was not sure of my progress. Distance was coming up a bit, maybe 10yds in the last month. Granted it’s getting a lot warmer. My Red SSR has been reading 105-108; then a few days ago I had a session where I saw a jump to 113-115mph..

Not only that— I shot a career best 30 (-6) for 9 holes. Four birdies, thanks to shorter irons/wedges off of the longer drives. And a chip in for eagle—from next to green on a par five, on a hole I usually can’t reach in two..!

Just shows me what I suspected, that if I can gain ~20yds+ consistently it will help my scores a LOT. Already has. Needless to say we won our match..

Here is Fantastic Testimonial via email, and you can see my response:

My swing speed as measured during a driver fitting 3 weeks ago was 100 – 101mph. That’s consistent with what I see on my swing speed radar.

I’ve been using the SpeedBall Kit intermittently (at best) due to some hand, back and knee pains. During the last three weeks my SSR speeds on my driver swing have jumped to 104mph… then 107mph… then 109mph… yesterday I started to hit 110, and then at lunchtime today I saw 111! Twice!!!

So you are a classic case of SAID with a little freedom mixed in…. Here’s the answer: Specific Adaptation to Increased Demand- your body/brain faced an Increased Demand (Speedball Impact Target) and then it’s smart, so it recruits more (muscle/muscle fires) because it ADAPTS to the Demand…. Then we add in the FREEDOM of not having to hit a tiny white ball, the 2 together are MAGICAL! What’s cool is that 110 will be the new normal and you also figure out quickly how to add that speed to a real ball.

Send me video if you have any questions!!
J

Next day I got this email with funny pic: 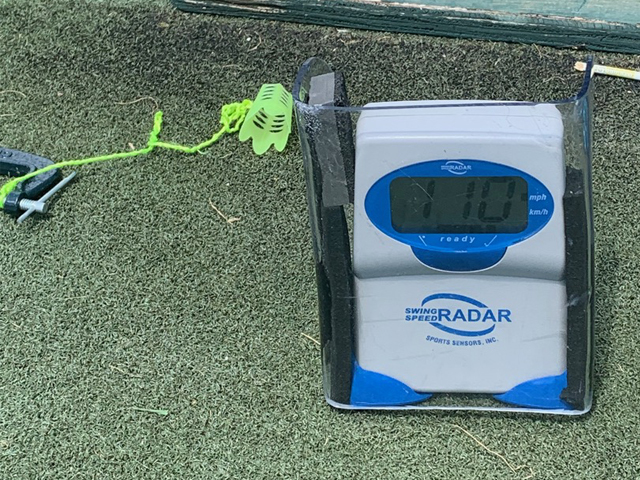 Crazy thing is this isn’t the end…. It has me swinging on a different path somehow that is way more balanced than previously, but I know there’s much more room for improvement. It has also completely eliminated my ‘wipe’ with the driver, where I hit these high, spinny cuts.

The SAID thing makes complete sense… there’s something about having to recruit the force to smash ‘through’ something that changes my whole approach to hitting a ball with a driver.

I forgot to add that I had my longest drive on a par 5 on my local course… though it was only the longest for a week as I followed that up with my longest drive EVER. 9 iron for a second shot into a par 5? What??

Oh, and FYI I used another training device extensively last year. I even went to their seminar in the fall. I gained a max of 5mph, but it came with a lot of niggling injuries, and I lost almost all of those gains this year.

I’m relatively short (5’ 9”), and about to turn 44, with two herniated discs in my history. I can’t believe how far I’m hitting the ball or how easy it feels!

I forgot to snap a 111, but I did take a pic of a 110 at the end of the session. Indoor tee attached to a woodworking clamp? Yes, I’m goofy.

Many thanks to you, John! What an amazing invention!!

With 36 years of competitive amateur and professional golf, working with John and performing his drills was the most fun I’ve ever had with an instructor. With little or no more added effort I went from 255 to a 293 carry just after seven swings, and that was the real fun! His approach brought out the athleticism in my golf swing.

Thank you!!!. Of course it is still a work in progress, but I can say with confidence that the 21/7 (at least the attempt to get to that tempo) has helped my game. The thing I’ve learned is that I have been tentative and too “controlling” of my swings. As long as I swing to the beats it assures aggressive swings. The most surprising part: PUTTING. The beats have basically straightened out my stroke. It’s amazing. And my long swing misses are not bad at all.

I couldn’t be happier. Again, THANK YOU!

Hey I just wanted to thank you John personally for your amazing product the ”SpeedBall”. I have been using it for about a month now and my results speaks for themselves. I was around 114 for my best club head speed. To touch 127 is crazy for me! Honestly I think there is some more in the tank. Watch out 130!
Thanks John! 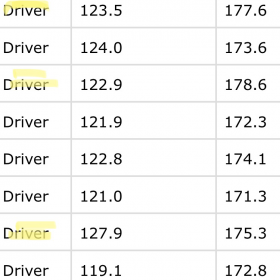