Your First Steps to Hitting the Ball Farther!

Should you be working on speed or Distance?? and what’s the difference??

Everyone is talking speed these days, especially increasing your speeds. I’ve been on that train for oh… about 20 years now!

And while I was one of the early adopters to drinking the speed kool aid, at the end of the day there is something that is more important than speed… it’s DISTANCE.

Speed is a means to an end, the end being Distance! It just so happens that more speed typically equals more distance, but let’s unpack this and what your goals should be when working on increasing distance.

One of the reasons we’ve all latched on to speed is that speed is much more tangible. When you say you have a clubhead speed of 110 mph and a ball speed of 165 mph, we all basically know what that means (assuming a good/accurate launch monitor). Speed is the velocity of your club and/or ball.

When you say you hit a drive 305 yards, we (the listener) have no idea if that was downwind or downhill, or hit the cart path or what exactly that means. The actual distance you hit is completely up to the elements: factors such as wind, firmness of ground, altitude, humidity, temperature, etc…. Distance is how far your ball goes.

In sum, speed gives us our potential and distance is the reality. At the end of the day, we want more distance, let’s look at how we start to achieve that.

Our first goal to hitting the ball Farther: Max Out your Current Driving Efficiency/Geometry. In other words, achieve a Smash Factor of 1.47 or better and create the optimal Launch/Spin to go with it. There are 3 main variables for distance:

You’ll need to get on a good launch monitor to get your numbers.

Here is a look at a good drive from a recent practice session I had. 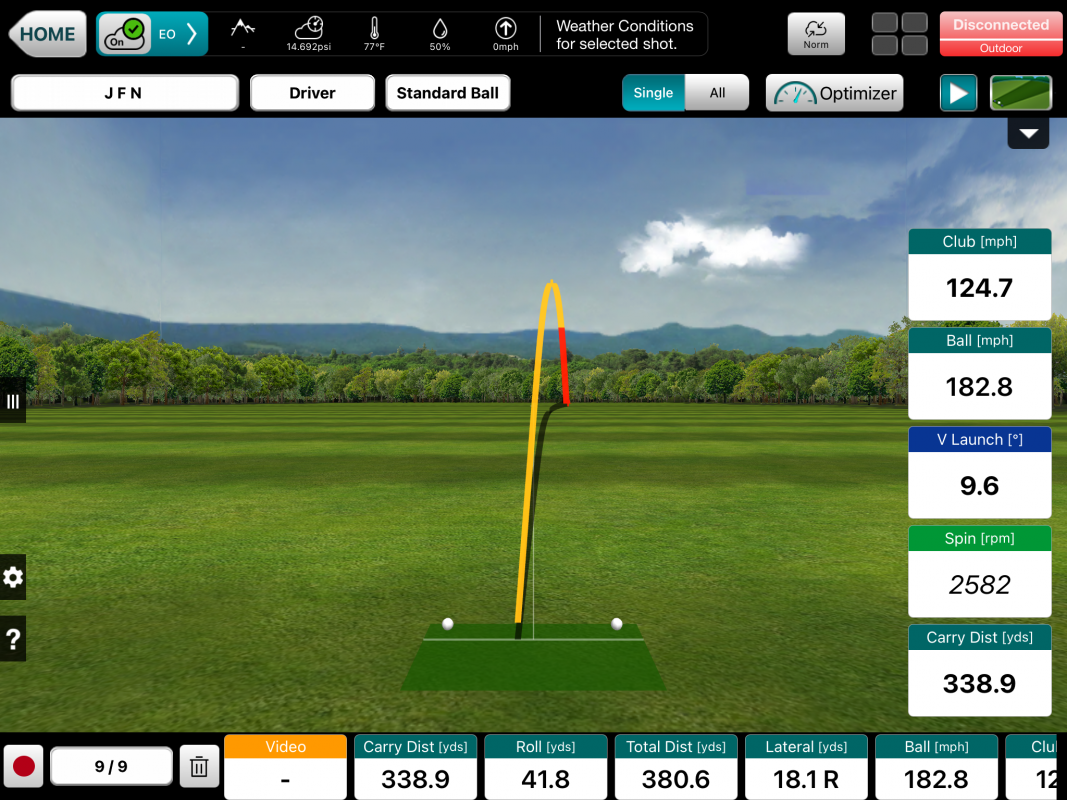 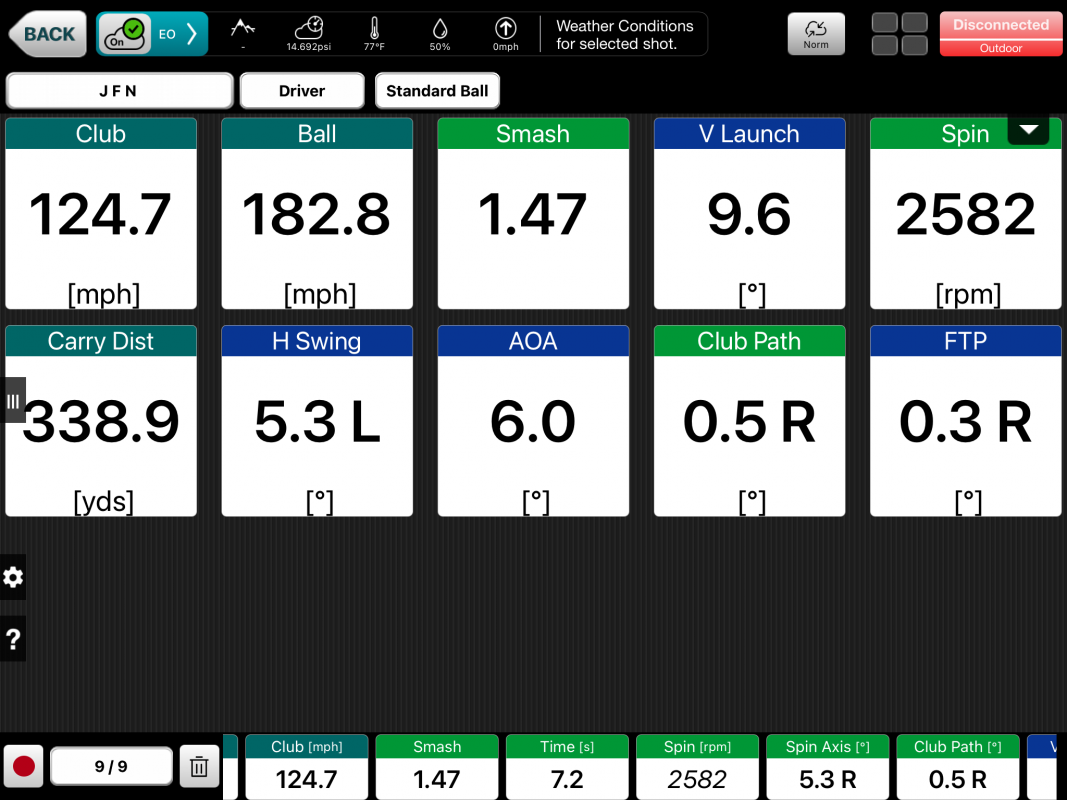 So, if I want some ‘instant distance’ I can get a slightly higher launch and slightly lower spin and I’ll pick up more yardage!!

I’ve added a 3rd screen shot showing the Flightscope optimizer and how much carry I would pick up based on improving Smash, Launch and Spin. 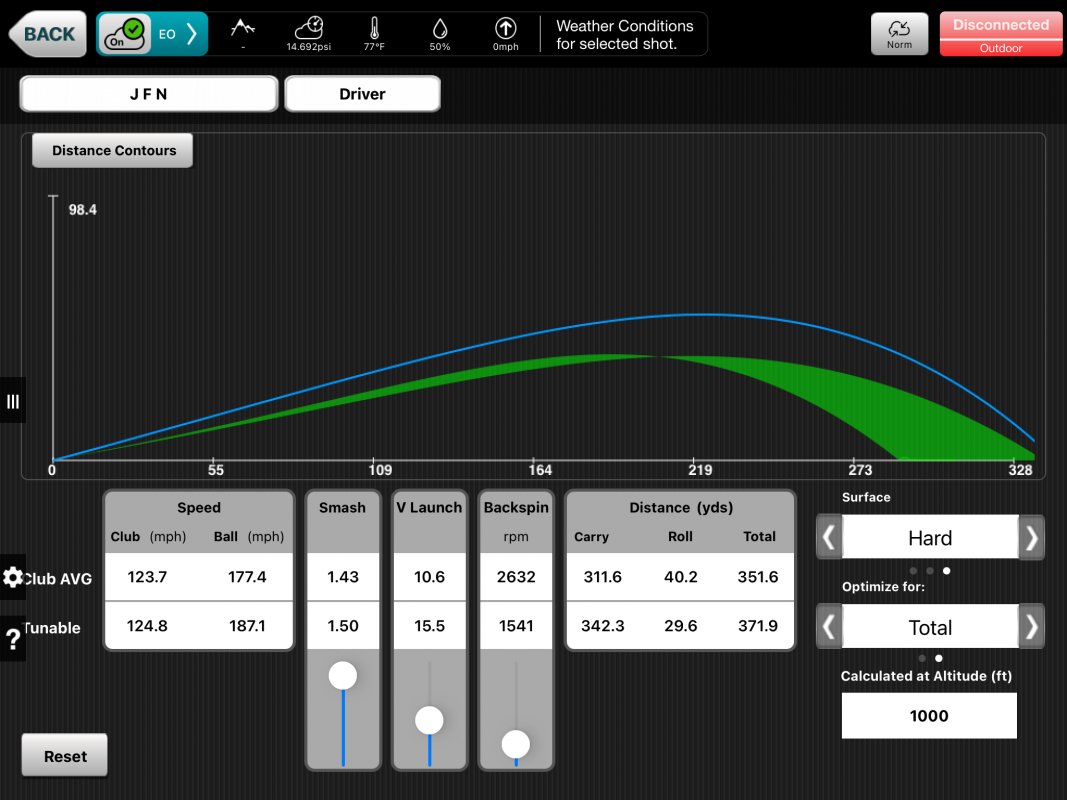 If you’re with me so far, you’re asking, “How do I improve Smash, Launch and Spin??”

Smash Factor is easy. Hit it in the middle of the face. Ok, it’s not that easy, but you get the concept. Hit it solid and you will max out your Smash.

Launch and Spin go hand in hand with Smash. If you hit it ‘on the screws’, you get optimal Smash, Launch and Spin (For that driver/shaft). If your Smash is good but launch and spin are off, we need to take a look at your equipment and your AoA.

In the example above my AoA is 6 degrees up (great AoA), so now we need to look at equipment. I was using a range ball and sometimes they have a tendency to be a touch spinny on the driver. My Launch was a bit low and again that could be ball, but also might be the loft or shaft of my driver. You can bet that I’ll be trying some different Lofts/heads/shafts and dialing that in!

Once you’ve dialed in your Smash/Launch/Spin, your only path to more distance is more Speed!

It starts with more Club Speed and I’ll be posting on that very soon… til next time, let’s see your numbers!