There are 4 ways to increase speed in the golf swing. You can improve/adapt/utilize:

In a previous post: Two Keys to Distance and Four Keys to Speed

What does it mean to improve your BODY?

It might start with proprioception. That’s a fancy way to say that you are more aware of what a muscle or group of muscles do. From there we might now get to actual movements:

If you move better through a body segment (mobility/stability), that’s an improvement.

If you get stronger, that’s an improvement.

If you create more speed/power, that’s an improvement.

For most golfers if we just get proprioception and the better movement we will increase speed. I think many of us try to get stronger/more powerful (which is great) but if you don’t move better in the swing, you won’t gain that much clubhead speed. So, where do we start?

When you have optimal loading of each of these segments, you are now set to create maximum clubhead speed. (You are also set to utilize any new strength and power gains you may have achieved in the gym)

In my new video series, RECODING for POWER, I highlight drills and exercises you can do with simple workout equipment (medicine ball and a resistance band) to maximize these 4 key loading points. 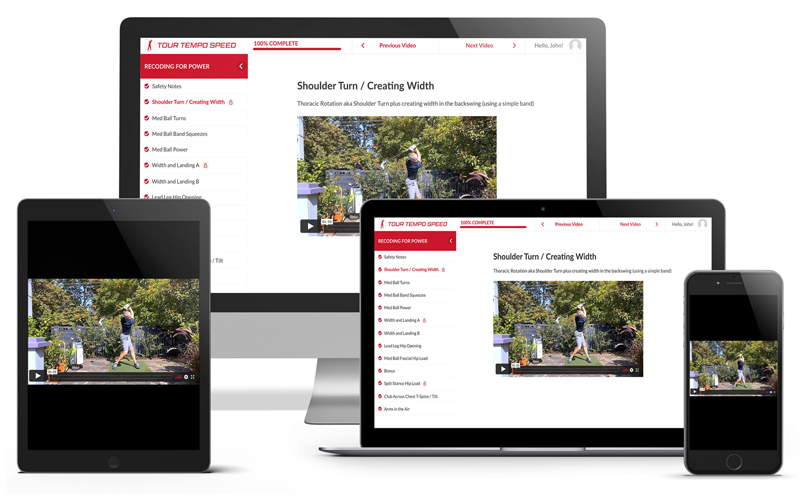 I’ve found that golfers can typically get into some of these loaded positions in a slow motion or practice swing. However, when they get over a ball, they lose their new movements.

Part of it is repetition. They’ve made thousands of (sub optimal) swings and just a few optimized swings.

Part of it is that the body doesn’t want to move there. Your body works on a principle called Specific Adaptation to Increased Demand (SAID). So, when you make your new move in a practice swing, there isn’t an adaptation because there wasn’t a demand. That is why I use the resistance bands and the med ball in the RECODING series, because we need to Increase the Demand on the movement so that your body will respond with a Specific Adaptation.

A perfect example of this is the first drill in the series:

Tune in next time as we continue this discussion.

Learn more about RECODING FOR POWER!